Leave a comment
By The Asian Fashion Journal Events

My friend Tony@Canvas got in touch to ask if I was free to help out at the ‘Barfi’ film launch last week. Hmmm the chance to be around Priyanka and Ranbir? HELL YES! I’ve been to many a fashion pr day but a film launch- never. There were two days of jam packed press interviews and a CRAZY meet and greet with the fans at Cineworld Feltham.

At the Press Day entrance- Ranbir was doing the promos alone on the first day.

In the evening we headed to Feltham where the fans went crazy for Ranbir! I’ve never seen anything like it! After signing autographs and taking pics with fans he judged a dance competition where some fans did their best Panchee dance and Ranbir sweetly joined in with them. 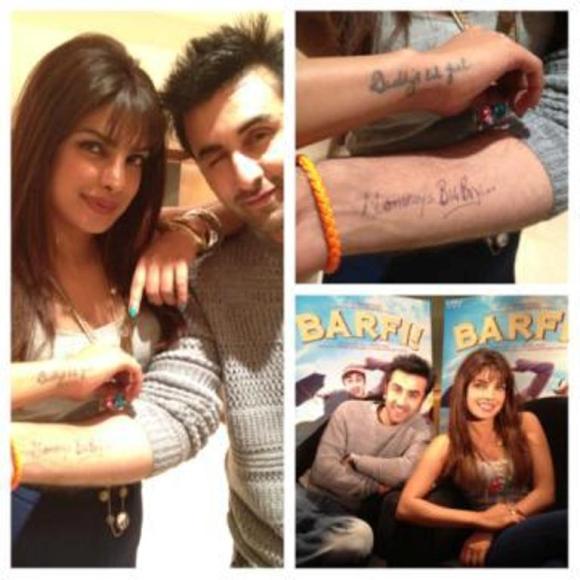 On the second day the Ohhh sooo gorgeous Priyanka Chopra joined Ranbir for the promos. She was promoting the film as well as answering questions on her eagerly awaited new single ‘In My City’ ft Will.i.am which is out Sept 13th.

The film itself is a sweet romantic comedy with Ranbir as Murphy a hearing and speech impaired guy who sees the lightness and joy in life. He’s joined by Priyanka Chopra as Jhilmil an autistic girl and I’leana D’Cruz who makes her Bollywood debut in the film. Enjoy the trailer and the film is out Sept 14th.

And thanks Tony for inviting me along!