It’s Lakme time again! I’ve been pouring over the yumminess over social media and while I can’t report from the shows in person I’m pretty glad to be bringing you the next best thing…A Guest blog by the VIVALUXE.COM team. VIVALUXE.COM is a new luxury e-tailer that brings Asian Designer Wear to a global audience. With the ohh soo chic Maheep Kapoor as fashion director the site’s edit promises big things (There are some more A-list names joining the site in the coming weeks) I will bring you more info on the site in a later post but for now enjoy their Guest Blog Post for me on Day 1 @ Lakme!

Fashion, fun and flower-power: A day in the life of LAKMÉ FASHION WEEK SUMMER/RESORT 2015
By Rea MM, VIVALUXE.COM for The Asian Fashion Journal.

Unless you’re a sartorial Scrooge; I think we can all agree that any LAKMÉ FASHION WEEK saunters into our lives like a mid-year Christmas, full of goodies giftwrapped painstakingly by designers to create their delicious new collection! This year though was particularly anticipated as LFW celebrated its 15th year and certainly did not leave the best for last, as the event opened offsite with Sabyasachi Mukherjee’s collection Big Love where he gave a new fashionable dimension to the saree! So, coffee in one hand and notepad in the other, the only way to take on this celebration of creativity is to head in with all guns blazing. Be prepared to have your brain, your instagram and twitter all work overtime for the next 5 days, as the sheer variety of colour, influences and drapes all vie for your top spot!
After a series of seriously intense model scouting days and fittings, inspirational Sabyasachi’s collection Big Love premiered at an unconventional venue – the fabulous rustic grounds of Richardson and Cruddas Mills in the heart of Mumbai.

The ramp was a never ending 200 x 20 feet, with high-tech multi laser lights, roving drone and camera mounted on gantry. It was the ultimate backdrop for a high-octane event worthy of a 15th year anniversary with the crème de la crème of the city in attendance as one of the best designers in India opened the celebrations with a spectacular show.

It was love at first sight for the audience as they witnessed a stunning presentation featuring 62 models and 105 outfits. One of the most sought after designers in the country and around the globe; Sabyasachi unleashed a collection of resort wear that paid tribute to the 70’s decade, which Sabyasachi adores. The designer revisited the era and showcased it with his distinct signature touches and recreated the power dressing period with unisex flower-power, long maxi-dresses, Lennon-esque sunglasses and heaps of glittery fabric. It was refreshing to see a shift from his usual bridal wear, and the enthusiastic applause at the end shows we’re not the only ones who think so! His eternal muse Rani Mukherjee and other Bollywood big shots like Kajol, Deepika Padukone and Sridevi were all present to show their support. 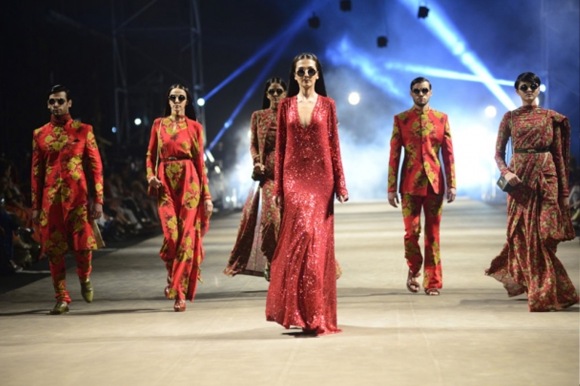 Back onsite, the 9th floor of Palladium Hotel had been transformed into a beachy haven. The grassy outdoors are now commandeered by bamboo-built bars and crocheted hammocks – lending the space an earthy vibe. They’re perfect for gathering on between shows too! Exposed bulbs hang down from jute rope, and come 6:00pm, they light up, illuminating the pretty faces and prettier clothes with a romantic yellow glow. Live DJ sets keep the stylish crowd pumped, and you can refuel yourself at the food stalls dotted along the premises.
Today saw the unveiling of collections that focused on Indian textiles, such as those by Vaishali Shadangule and Krishna Mehta, whose breezy drapes and mix of indo-western silhouettes made for an interesting watch and interesting shift from the usual glitz of Asian styling.

Masaba’s innovative launch on instagram scores her brownie points for originality as one of the most popular and trendy young designers in India presented her colourful line first on popular social media platform, Instagram. 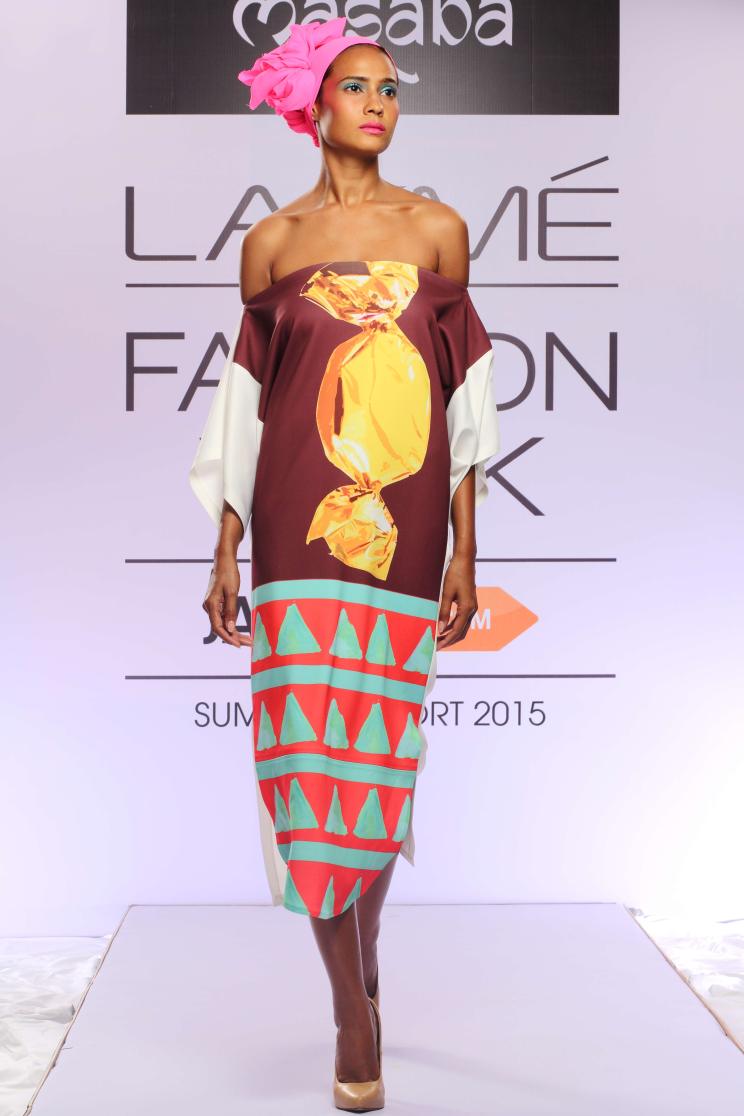 Finally, never failing to disappoint, Manish Malhotra proved his mettle as both, designer and humanitarian yet again, as the Blue Fashion Runway raised awareness for Gender Inequality. The peaches, creams and blues complimented the stunning metallic embroidery that featured on all his garments, with the off-shoulder white number being a particular favourite of ours: 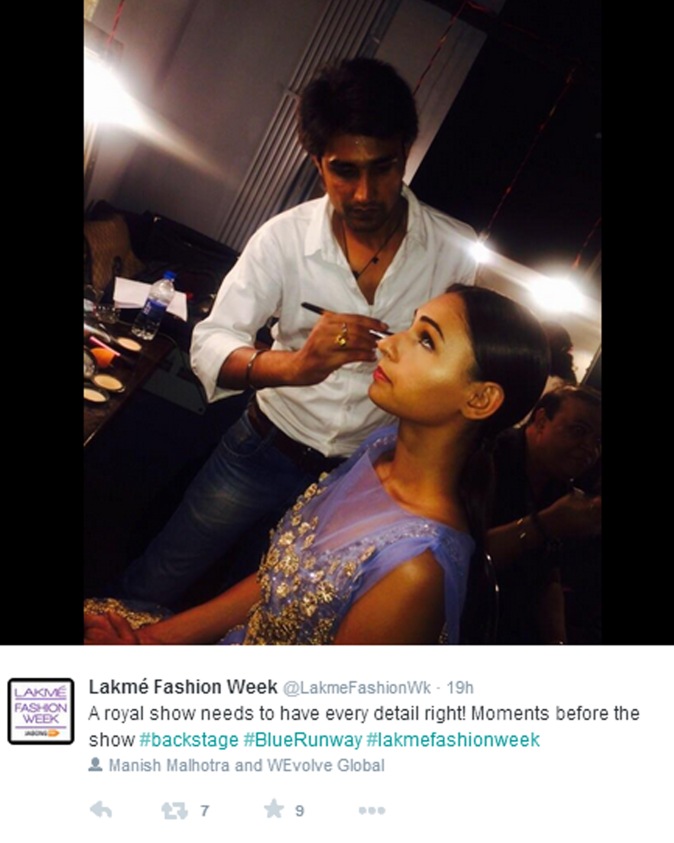 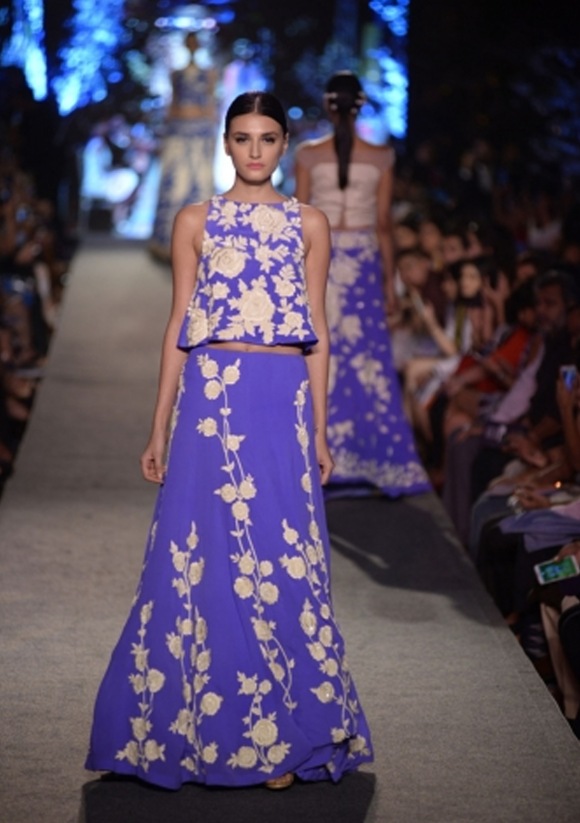 What a day, folks, what a day!

Leave a Reply to The Asian Fashion Journal Cancel reply