Last month the Grand Ballroom of London’s luxury hotel, the Dorchester played host to the first ever Aashni & Co Wedding Show with the crème de la crème of Indian designers and new gen talent. Aashni & Co’s Notting Hill boutique opened in 2012 and is already the leading store in London for luxe Indian designer wear. The wedding show provided an opportunity to showcase the store’s designers on a larger scale and to a larger audience.

I was lucky enough to join Aashni the store’s owner on BBC 94.9- Jo Good show that week to talk about Indian weddings and the wedding show. It was the first time I’ve been on the radio and the fifteen odd minutes we were on air seemed to fly by. It was a great experience and a big thanks to Jo, Nishy and Gurpreet @ the BBC for making the experience enjoyable. Ok back to the wedding show….

“ I am so, so, so humbled that these designers have taken that leap of faith and have actually come down here to be in one room with each other and be part of Aashni & Co. It is time people stopped travelling all the way to India to find their wedding outfits- we wanted to bring the best of India’s bridal to our doorstep.”

I got married last year and the exhibition was a perfect opportunity to connect (translate to get star struck) with some of the designers who I wore for my wedding which included Manish Malhotra, Sabyasachi, Varun Bahl and Arpita Mehta. 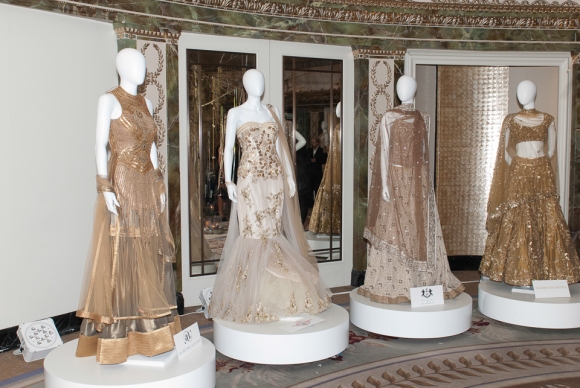 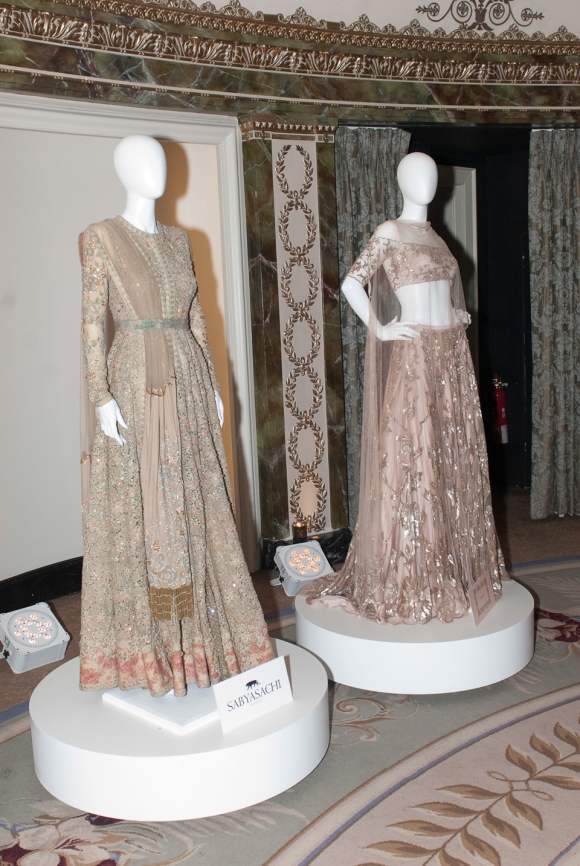 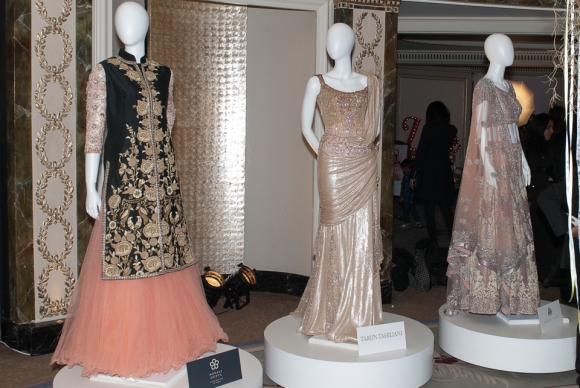 I caught up with Sabayasachi and asked him…

You already have a connection with London. How does the U.K bride differ to the brides back home?

“Yes, I do. I did a short stint at London Fashion Week and before I came to London with my Bridal wear. I used to also cater to the western audience here through Browns and Selfridges. So, I do have a good idea about what the girls in London want from us. They like being traditional and every single bride whether conservative, whether democratic, whether eccentric actually fantasises about looking like a princess on their wedding day. So we try and keep the fantasy in mind but make sure we keep ethnicity in mind too because of course she is an Indian Bride.”

I also asked him what tips he would give a bride when shopping for her trousseau.

“I’d tell her to do some yoga before you come shopping and get a little introspective because I think it is very easy to get swayed by other people’s opinion on what you should wear but at the end of the day its your wedding so just wear what you want to wear which means if you want to wear a GAP t-shirt and get married just do it.”

I love his answer because it’s so true wedding shopping can become stressful with everyone having an opinion on what you should and should not wear! 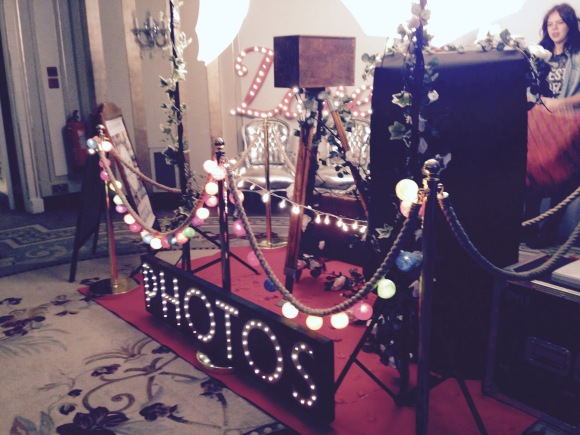 Photo Booth at the entrance

Cakes by Krishanthi- these pics don’t do the cakes justice. The designs were sooo detailed and intricate. Image Credit: Shahid Malik

Getting a lesson on how to take a selfie by Kay from the Desi Dossier and Raj from The Secret Wedding Blog. Was good catching up with other bloggers at the event. Image Credit: Raj Dharar

The event was a first for London and it was lovely to see such a wealth of Indian craftsmanship and talent in one place. With U.K brides following the trends in India (albeit sometimes a little latter) weddings are becoming longer with more and more events to shop for. I really hope it becomes a regular event…are you reading Aashni?

I have interviews with Shehla Khan, Arpita Mehta and Anushree Reddy coming up on the blog in the following weeks- so keep a look out!

Aashni & Co, (yep that Indian designer boutique in Notting Hill that I constantly blog about!) is hosting what can only be described as the LARGEST and most EXCITING Bridal show London has ever seen!

Why is the show going to be more amaze balls than the dozen or so Asian wedding shows that have been announced for 2015? Well, its down to the huge variety of luxury Indian designer labels that are going to be showcased. I always get asked how Indian designer prices compare to the UK Indian designers prices and most people are surprised when I say that the cost of many of the designer pieces are actually on par with UK designers like Ekta Solanki & Mona Vora. The designer list includes Anamika Khanna, Anushree Reddy, Arpita Mehta, Ashima-Leena, Elisha W, Jaipur Gems, Kotwara by Meera and Mufazzar Ali, Manish Malhotra, Monisha Thahryamal, Nikasha, Pallavi Jaikishan, Rajesh Pratap Singh, Rimple and Harpreet Narula, Sabyasachi, Shehlaa, Sonali Gupta and Varun Bahl.

Below are a few non celeb pics of some of the designers work. 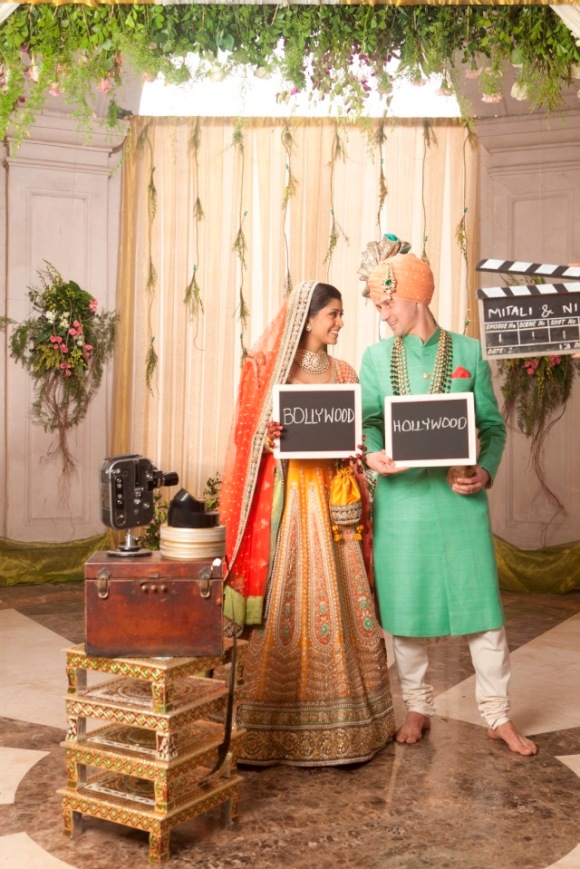 Pic of a bride and groom wearing Sabyasachi from Band Bajaa Bride show. Image Credit: The Purple Window. I actually got to meet Sabyasachi briefly. We’d gone in to his store to look at wedding lenghas for my sister and he was filming for Band Bajaa Bride’s new series.

The Aashni & co store is fab and stocks many of the designers listed above but as fab as the store is- it is small and carries maybe 100 pieces at a time. They do constantly have trunk shows and I bought my Sabyasachi wedding lengha after a show. Unfortunately I didn’t find anything else I liked and decided to do the rest of my wedding shopping in Mumbai. This show though will be giving brides to be way more choice. I’ve been told designers are bringing an average of 80 pieces each over. Yep, all bridal shopping can be done in London! and in one place! Details of the show and how to get tickets are below.

Real Bride wearing Manish Malhotra. Image Credit: Manish Malhotra Facebook I wore a Manish Lengha for my Civil Ceremony- more details here and my Mum has ordered a couple of tilla work outfits from his store during our recent trip to Mumbai

Arpita Mehta via Arpita Mehta Facebook. I LOVE Arpita’s work. I wore one of her lenghas for my Mehndi and both me and my sis picked up pieces by her on our recent trip to Mumbai.

Here’s the all important details for the show! And follow the links to purchase tickets.

And just to let you know Manish Malhotra & Varun Bahl have both confirmed attendance. I will post any updates as and when I get the info! This truly is a show not to be missed.

The Chennai Express promos are in full swing and as always its the wardrobe choices I’m interested in! Deepika has been looking soooo hot and here are my fave five promo looks of hers so far… 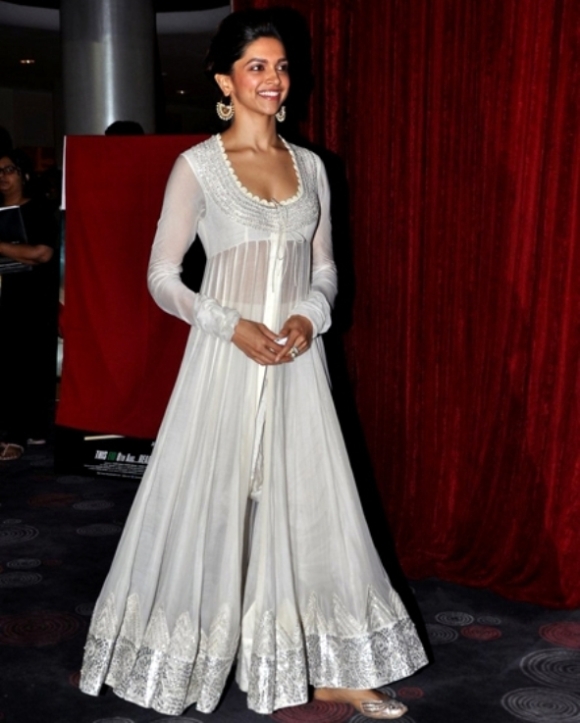 Deepika in a simple and elegant outfit by Anamika Khanna

I LOVE Manish Malhotra’s PCJ Delhi Couture Fashion Week collection and Deepika and Shah Rukh Khan were the showstoppers at the event. Deepika looked Ahhh-mazing in this stunner of a lengha!